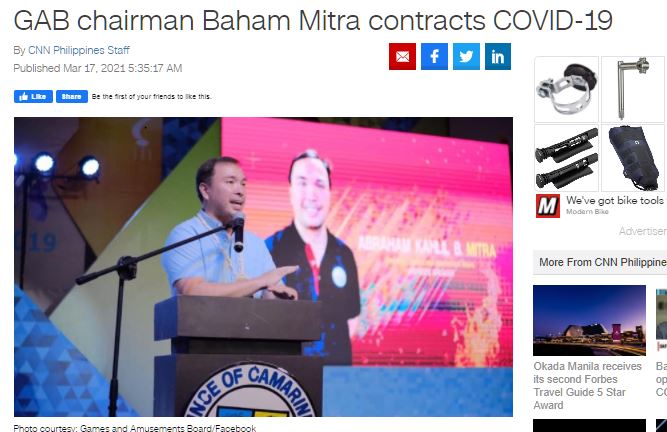 It is no surprise that Baham Mitra has now suddenly caught COVID-19 since the evidence continues to stack up and compound against him daily for all of the crimes this insane criminal has committed from the time he entered politics.

The Filipino people have spoken out online and on social media. An overwhelming majority of Filipino citizens on social media have already stated that they are tired of corrupt, despicable bureaucrats like Baham Mitra who use their government positions specifically for the purpose of self-aggrandizement, criminal syndication, corruption, and blatant criminal behavior as Baham Mitra has displayed in government-appointed positions as:

Whether he is scamming on the price of concrete to illegally siphon off government appropriation money into his personal bank account, being an accessory to political murder by his constituents in Palawan, cheating rice farmers out of money in Palawan (and stealing the money too!), or personally attacking and sabotaging a private citizen of the Philippines, Juan Luckey, for the sole purpose of sabotaging an innocent citizen and targeting KO Warrior for sabotage for the sole purpose of gaining money by cheating for Brico, Elorde, Monis, Sanman, Quibors, among other boxing promoters in the Philippines and abroad.

The crimes Baham Mitra have done are despicable and destructive beyond imagination. This guy is a really super sick-minded person and he takes thrills in destroying others.

Baham Mitra is a straight scumbag who likes to fool people to make them think he is a good person. He relies on the Philippine media a lot as his propaganda tool. In reality, he is a self-serving corrupt criminal who will steal candy from babies and snatch purses from old ladies as long as he can continue denying the allegations and move on to his next victim.

An Entire Political Career of Robbing, Cheating, and Scamming

Here is a list of just some of the criminal scams Baham Mitra has done while working in the Philippines government:

Baham Mitra has an insatiable lust for money and has never learned how to earn an honest peso. This individual operates in a very devisive manner because on the surface he appears to be an honest, kind, hardworking civil servant who serves the Philippines government and the people. NOTHING COULD BE FURTHER FROM THE TRUTH!

In 2004, he was caught red-handed doing malversation of public funds for misappropriating through negligence P3 million in fertilizer funds through his GabayMasa Scam:

Here is an excerpt from The Palawan Star:

Former Palawan Gov. BAHAM MITRA,THE OMBUDSMAN IS SERVED BECAUSE OF CORRUPTION! – by Jeff QuilogIn the case of graft, the former Palawan Governor Abraham ′′ Baham ′′ Mitra was SLAPPED, yesterday Tuesday, September 27, 2016, Mitra was formally hit including 11 others connected Allegedly in graft and malversation in Fertilizer Fund scam.According to the Ombudsman, there has been an alleged conspiracy between Mitra and five officers of Department of Agriculture (REGION) and Gabay Masa Development Foundation Inc. an NGO because of the anomaly use of Fertilizer funds for farmers.According to the report, it is estimated that the funds for the said project to be passed by the NGO Guide Masa Dev ‘ t Foundation will implement the said project with the help of DA, but it is easy to release 65 % of the total fund o P1. 95 Million in April 24,2004 under the leadership of Mitra who is a former congressman of Palawan’s second district, which is allegedly against the law that only 20 % of the total funds should be released after the approval of the said project and it was followed by the release of P1. 5 Million by December 29,2004.We are still trying to ask Mitra for a reaction regarding the said issue, Mitra became congressman of the second district of Palawan and Governor of Palawan in 2010 who is now appointed as the Chairperson of Games and Amusement Board.- The Palawan Star

“‘Pag tiningnan mo ‘yung kalsada, mukhang mashed potato,” the young Ortega noted. (If you look at the roads, they look like mashed potatoes.) Baham Mitra is a man of no conscience. He worships wealthy people while he robs, scams, and trashes his own people and he does this with no conscience at all.

It wasn’t until 2016 that he escaped criminal charges because Baham has stolen so much government money through illegal activity in addition to promoting and expanding his family’s businesses in Palawan using his government positions, he is able to pay off well-connected attorneys and pay the right people to get all allegations and charges dismissed.

In 2010, Baham was back again doing corrupt actions by lying about his address. He wants to be governor of Palawan, but lies about where he lives. Then he will steal government money to do construction on his house and then post videos of his ill-gotten gains on Facebook. When Mitra’s case reached the Philippines Supreme Court, he was able to pay off people to drop charges of his, once again, corrupt behavior.

A History of Blatant Corruption

In 2011, Baham Mitra was once again back to scandals and scams. Listen here as the caller describes how Mitra behaves in such a corrupt manner and cheats without conscience.  Baham Mitra blatant corruption in the Province of Palawan. Here, he is already referring to the alleged misuse of the P520 Million given to then Representative, now Governor, Abraham Khalil “Baham” Mitra. Doc Gerry focuses his commentary on the 21 roads and bridges declared to cost P20 Million each.

Together with Kilusan Love Malampaya, of which Doc Gerry was Chairperson, he was able to secure copies of the DPWH Program of Works. KLM asked for DTI’s help in determining prevailing prices of materials used on the years that the roads were constructed. They were then able to establish that there was indeed overpricing. (i.e. A sack of cement supposedly costing P210 was declared to have costed P450).

Baham Mitra has been criminally charged with 13 felonious criminal counts ranging from corruption, fraud, theft, gross misconduct, violation of presidential orders, perjury, and the list goes on. In his usual fashion, Baham Mitra will deny all allegations. This strategy of doing blanket denials of all allegations has worked successfully in the past for Baham and he will continue to deny allegations because he thinks he can make an entire political career out of cheating, scamming, and stealing from innocent people.

Check out a few of the scams Mitra did:

Baham Mitra should have never been allowed to be in control of pro boxing. He did extensive damage to Juan Luckey and KO Warrior then after hiding like a coward for years until he was exposed, he chooses to continue to be a coward and deny all allegations against him. He is the truest example of a spineless coward who refuses to own up to his criminal actions and pay for the damage that he has done.