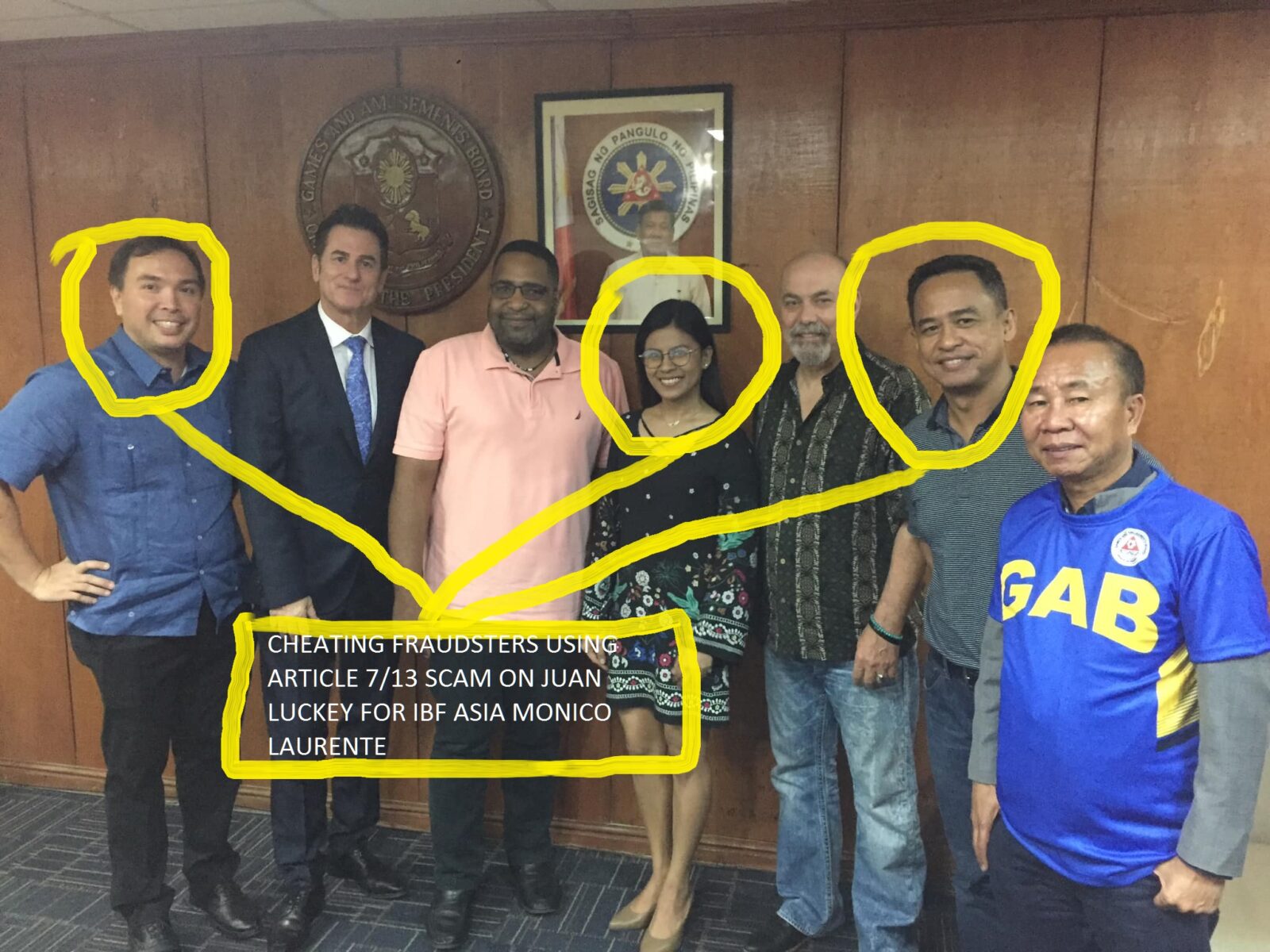 KO Warrior has already made it very clear and evident with OVERWHELMING PROOF that WBC Governor and Philippines Games and Amusements Board (GAB) chairman, Ahraham Khalil Mitra, aka Bakla Baham, is one of the most duplicitous, criminal individuals in professional boxing today.

KO Warrior experienced over $2 million USD in collateral damage from this one individual who thinks it is ok to do criminal behavior as a government official, attack an innocent private citizen in pro boxing, then deny all of the allegations after doing nonstop attacks on KO Warrior for 5 years in a row! Baham Mitra is totally insane!

Baham Mitra always ensured that Juan Luckey was never allowed the privilege to have a manager’s license in the GAB, alhough he always had a manager’s license from New Jersey, USA. By refusing this privilege, Luckey was forced by GAB to sign management agreements with boxers under his wife. Baham Mitra used this deceptive tactic as a setup to steal boxer Monico Laurente.

Using the article 7/13 scam cleverly devised by Bakla Baham and the cheating scammer attorney Benitez, Baham Mitra met with individuals from the IBF to arrange the following fight:

Not only did Baham Mitra and the IBF collaborate with a Chinese CCP Party Promoter to give them a TKO win at the expense of a talented, veteran Filipino boxer Monico Laurente, but IBF President Daryl Peoples and the criminals Baham Mitra and Omar Benitez made this agreement in Makati, Philippines (see photo above) to make the fight deal by stealing Monico Laurente from KO Warrior. Laurente was under a binding management contract with Cherry Ann Luckey. Baham Mitra and Omar Benitez committed serious theft and fraud by making this fight agreement with the IBF.

Monico Laurente took the fight for the IBF Asia Light title versus XiangXiang Sun in Beijing, China on 3-28-2019, however no manager fees and no money that is contractually owed for this fight was paid. Baham Mitra stole a large sum of money from KO Warrior and he is a thief who must be criminally charged.

When Monico Laurente came to KO Warrior in 2018, he was ousted from his gym by Elorde Promotions who wanted nothing to do with the boxer. Laurente contacted Juan Luckey asking for boxing management and to help his career get back on track to become a champion. Juan Luckey did exactly that by arranging Laurente’s career comeback fight vs. Philip Parcon in KO warrior’s Promotion on April 28, 2018 to win the Mindanao Professional Boxing Association Flyweight Championship although Baham Mitra ensured that Juan Luckey was not given any credit for his work by omitting Luckey’s name from all official boxing records in the Philippines.

KO Warrior was robbed by Bakla Baham, GAB, Benitez, and the IBF. How can these people not be held accountable and blatantly, overtly, openly stealing from KO Warrior and then deny allegations and talk shit. Baham Mitra and his GAB minions are the most insane government employees I have ever seen. They operate this agency like they work in a mafia and Baham Mitra believes that he is above the law. He also encouraged members of the IBF to break the law and rob KO Warrior.

Here is the letter Juan Luckey wrote to the IBF:

Chinese promoter Andrew Lu violated Article 13 of the GAB rules. My boxer, Monico Laurente was told by Lu’s matchmaker Art Monis to file a false Art. 13 complaint on me in order to circumvent the rules to accept Lu’s IBF Asia Lightweight title fight offer in Beijing, China on Mar 28, 2019.

Art 13 says, “If there is a pending case before the Board between the manager and boxer in connection with their Boxer-Manager contract. ln this case, the promoter who engaged the services of said boxer shall be required to deposit with the Board the share of the registered manager for safekeeping. The case should be resolved within two (2) months.”

Although GAB legal did a great job resolving the case within the 2 months period, Mr. Lu never deposited my manager’s share with the Board, thus violating Art. 13 and cheating me out of my manager’s fee. I also contacted Art Monis on FB about the violation and he never replied.

I request that immediate punitive and reconciliatory action be taken for this egregious violation of the GAB rules. If Mr. Lu cannot pay back what he owes to me in a timely manner and give a formal apology for his violation, I would like to consider further escalating the matter with the IBF in addition to other civil and legal arbitration channels. Your immediate attention would be greatly appreciated.

When KO Warrior contacted IBF president Darryl People’s about the Baham Mitra fraud, nobody from the IBF wanted to speak with Juan Luckey and nobody replied to the complaint sent above. Both Bakla Baham and the leadership of the IBF are cowards, frauds, and cheats to commit such a duplicitous, communist-inspired criminal act towards Juan Luckey and KO Warrior and have the audacity to deny, play stupid, and ignore the allegations. These people are truly cowards and do not represent real pro boxing.

In addition to filing criminal charges on Bakla Baham Mitra, KO Warrior is also seeking damages to recover over $2 million USD in losses from the damage Mitra and the IBF have done to Juan Luckey and KO Warrior. How long will the IBF continue to deny their wrongdoings and criminal cheating with the corrupt, con artist, WBC Governor Abraham Khalil Mitra?