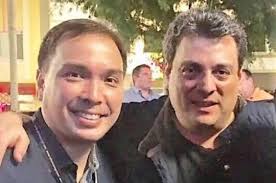 Many people regard the World Boxing Council (WBC), as the most prestigious and highly-regarded boxing sanctioning body in the world. However, most people are not aware of a seedy criminal element that exists within the WBC, specifically in the Philippines under the direction of the corrupt con artist, scammer, thief, liar, corruption-maker, and supergay criminal Oligarchy politician – Abraham Khalil Mitra, aka Bakla Baham.

Since his appointment as the chairman of the Philippines Games and Amusements Board (GAB), this cheating slimeball has done everything imaginable to sabotage and destroy KO Warrior Boxing. Although his efforts failed miserably, he was able to accomplish over $2 million USD in collateral damages to KO Warrior to include serious corruption, fraud, theft, organized crime, cyberlibel, and more!

Then, when this insane, mentally-diseased, homosexual con artist gets called out for all of his criminal wrongdoing, he has the AUDACITY to play stupid and innocent, then rubs on the black dirt sticking to his neck, and then denies all of the allegations.

In an unprecedented move, KO Warrior Promotions Promoter Juan Luckey recently filed 15 serious criminal charges against the cheating corrupt criminal Baham Mitra with the Makati Prosecutor’s Office. These charges are for all the crimes this criminal politician masterminded while serving as GAB chairman, for the specific purpose of tearing down KO Warrior Promotions in the Philippines to aggrandize other promoters, managers, and others specifically (Brico, Monis, Elorde, Sanman, Quibors, Omega Promotions among others).

It is Time for Bakla Baham to Stop Lying and Denying

Bakla Baham thinks it is ok to rob, steal, and cheat people then tell lies and deny allegations. The reason he thinks this crazy behavior is so acceptable is that he has been a scammer and con artist for his entire political career. Since he started working in politics, Baham Mitra has constantly remained in trouble because he is always using his government positions to lie, rob, steal, cheat, make money for himself and his family members, then deny all the allegations after he robs people.

Baham loves to rally subordinates, attorneys, and other politicians to rally behind him after he has done crimes. He will then get these people to vouch for him and claim he is innocent. Baham Mitra is a criminal disguised as a politician.

How the WBC Infiltrated the Philippines

Mauricio Suliaman, president of the WBC, is a very intelligent man. He could clearly see back in 2016 that Bakla Baham is a complete idiot moron and sort of like a baby or a monkey, when he sees something shiny, he gets really excited. When Baham saw WBC belts and offered an appointment to the WBC Board of Governors, he couldn’t wait to sell the Philippines to the WBC and destroy boxing in the Philippines for the next 6 years.

Mexico pro boxing has already had a history of inviting Filipino boxers to Mexico for a $1500 KO and then get sent packing with no title and a loss on their record back to Manila. Bakla Baham came up with the genius idea that if he cashes in on the WBC by appointing himself to the Board of Governors, this would somehow solve the Philippines’ boxing dilemma with Mexico. Wrong!

Unfair Promoter of the WBC

Baham Mitra has promoted the WBC for the entire time he has been GAB chairman. A GAB chairman is supposed to be impartial, not favor one sanctioning body over another, and definitely should not be promoting an organization that has a history of knocking out great Filipino fighters who didn’t deserve it for small $$$ and losses on their records. Baham Mitra cares nothing about all of this because he is extremely ignorant, narrow-minded, and actually worships the people who have a history of using, abusing, and destroying Filipino boxers who just want a fair fight.

Never, in the history of the Philippines, has a boxing official kissed so much ass to one sanctioning body the way Bakla Baham kisses ass to the WBC. The WBC must be sending this guy $100000 a month in Bitcoin the way he promotes this organization in the Philippines, but totally shits on all other sanctioning bodies around the world except for the ones who he is able to siphon money from i.e. WBC, IBF, WBF Foundation, Japan Boxing Commission, among many others.

Bakla Baham’s behavior is so blatantly corrupt, just plain wrong, and against the law which is why KO Warrior Promotions seeks damages. A boxing official is not supposed to marginalize people in pro boxing just to benefit a handful of his friends. This is corruption in its purest form and Baham Mitra thrives off corruption, cheating, and criminal behavior. He is a person who does not know how to do things honestly or conduct pro boxing in a fair and impartial manner.

WBC Must Accept Their Role in Bakla Baham’s Crimes

The reason Bakla Baham committed so many crimes as GAB chairman is because the WBC made him feel invincible. When KO Warrior first complained to the WBC about Bakla Baham’s corrupt criminal behavior, the WBC, particularly Jill and Suliaman, continued to support the criminal organized criminal supporter and thief Baham Mitra.

When will the Philippines government and the WBC hold this criminal cheater accountable?