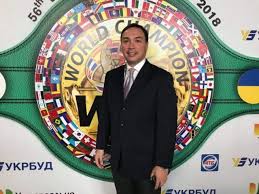 Since 2016, KO Warrior Promotions has been under direct assault, attack, and sabotage by appointed members of the World Boxing Council: WBC Governor Abraham Khalil Mitra and WBC Judge Robert “Bobby” Bridges. These two individuals, who hold highly-regarded positions in the WBC, did criminal acts from 2016-2021 for the sole purpose of attempting to destroy KO Warrior Promotions. Their efforts failed miserably yet they have not been criminally charged and they are still backed by WBC president Jose Suliaman.

As WBC governor and chairman of the Philippines Games and Amusement Board, Abraham Khalil Mitra, aka Bakla Baham, as well as Robert Bridges, aka Bobby “The Bootysnatcher” Bridges, a corrupted boxing judge in the Philippines Games and Amusement Board who was awarded WBC Judge of the Year in 2018, both collaborated to do defamation, contractual theft, scams, and fraud against KO Warrior by relying on Baham’s Mitra/Attorney Omar Benitez Article 7/13 scam to further destroy the KO Warrior team by manipulating boxer Stephen Intino which KO Warrior not only debuted, but took this boxer on a 3-0 win streak before Mitra and Bootysnatcher got their hands on him.

As a result, Bakla Baham used the Article 7/13 scam with the corrupt cheater criminal attorney Omar Benitez to fight Intino as a B-sider loser to take a loss in Quibors Promotion on OCT 6, 2019 versus Jerome Baloro. This totally ruined all of Juan Luckey’s work for several months as a pro boxing manager to take Intino on his 3-0 win streak with KO Warrior Promotions. Bakla Baham still carries on the lies to this day that Juan Luckey was never a pro boxing manager and promoter in the Philippines. He is a scummy, lying coward.

Both Bakla Baham and Bridges have never had a conscience when it comes to Juan Luckey and actually took enjoyment in destroying all the money, time, work, and effort that KO Warrior made to take a 17-year-old like Stephen Intino from amateurs and successfully debut him as a pro at such a young age and little amateur experience.

All of these accomplishments which took A LOT of time, money, and effort was done in our own KO Warrior Promotions which Bakla Baham STILL, to the time of this writing, refuses to give any credit to Juan Luckey with the sole purpose of destroying any record of Juan Luckey working in Philippines professional boxing.

Baham Mitra is super insane, psychotic to have such a hateful, negative obsession against another man who just loves boxing. He is one of the most insane people to ever work in boxing, sports, and government and KO Warrior never deserved these attacks from WBC-appointed officials.

Robert “The Bootysnatcher” Bridges – Corrupt Cheating Judge of the WBC

At one time, Bridges was an honorable person in boxing. However, he had ambitions, dreams, and goals he wants to achieve and he decided that the best thing to do was collaborate with Baham Mitra to sabotage Juan Luckey and KO Warrior. Bridges is truly a corrupt, spineless, compulsive liar, cheating, backstabbing coward and I would never want this person judging any fight of mine.

While disguising himself as an honorable WBC boxing judge, inspector, and ref, and a military vet who is so active in WBC Cares charities and giving out styrofoam boxes of food to elderly people with 99c dollar store-bought food that he cooks in his roach-infested kitchen; the truth is that Bridges did everything he could in his corrupted mind to sabotage and destroy Juan Luckey and KO Warrior Promotions in the Philippines from 2016-2021 as an agent of Bakla Baham.

Bridges is also responsible for participating in the sabotage of KO Warrior’s Siargao Boxing Promotion on January 27, 2019 where he was assigned to be a judge at the event and then just didn’t even show up. This person is an evil, Satanic spineless coward and backstabbing snake.

KO Warrior spent thousands of dollars to put the boxer Intino in Bridges’ backyard gym (at Bridge’s request) so that Bridges could earn pro boxer trainer experience and get GAB trainer licensing as a PRO COACH at the expense of KO Warrior. We did this as a favor to Bridges and did not charge him any money at all. Instead, he chose to steal from KO Warrior. All Bridges and Mitra can do is think of boxing scams and how to do more scams. These two individuals thrive in a boxing-scammer culture and environment and believe that it is ok to destroy others who are innocent in order to elevate themselves.

The Stephen-Intino-Boxer-Scam by Bridges caused the loss of a boxer to KO Warrior’s stable through Baham’s Article 7/13 Scam in addition to thousands of dollars in losses to KO Warrior. Just like Bakla Baham, Bridges will play stupid, pretend Juan Luckey is crazy, and deny all allegations and play like he’s innocent. He did extreme damage to Juan Luckey and KO Warrior and refuses to admit his criminal actions.

The crazy thing is the leadership of the WBC continues to support these guilty criminals and keep them on their payroll despite all the evidence that is stacked against them. There is more than enough overwhelming evidence to prove and show all the corrupt behavior and criminal actions that these two individuals have taken towards Juan Luckey, KO Warrior Promotions,  and many others in professional boxing.

The WBC has been attacking KO Warrior since 2016 and refuses to acknowledge the behavior of their criminal leaders. These two cowards even went as far as to pull up a criminal record on Juan Luckey that happened in Tampa, Florida over 16 years ago to try and smear him and label him as a criminal.

Cowards Who Attack Another Hardworking Professional in Pro Boxing

That 16-year old silly misdemeanor charge which Mitra and Boobie tried to label Luckey as a criminal, has been expunged from Juan Luckey’s record by his attorney. It was a simple mistake for having a 5-inch pocket knife (taken from an Iraqi soldier) in his carry-on bag which was gifted to him by his brother who had just reunited with him after not seeing each other for years while his brother was serving in the Iraq War. It was a terrible gift.

While the gift was thoughtful, the TSA found the knife, made an example out of Luckey with a new TSA trainee who was on her first day on the job, totally excited to catch someone with a 5-inch knife (the legal length was 4 inches), and arrested Luckey. There was not really much of a crime going on.

Mitra and Bridges have used this criminal record many times and have passed it around to anyone who they want to convince that Juan Luckey is a “criminal” and “dangerous to boxing” and “dangerous to Filipino boxers”. These are the words that are constantly uttered from the filthy mouths of Mitra and Bridges. Both of them are guilty of slander and defamation and there is more than enough evidence to prove it. Both of them also deserve to go to prison for their cowardly criminal efforts to sabotage and destroy KO Warrior.

WBC is Full of Racist, Criminals

This evidence shows the real racist, criminal leadership of the WBC, while KO Warrior has done nothing but elevate and promote professional boxing. Instead of being rewarded for years of hard work, we get destroyed by WBC cowards. KO Warrior stands for loyalty, discipline, respect, and hard work. We don’t lie, cheat, and steal. However, the WBC does it all the time.

On June 21, 2020, Promoter Juan Luckey wrote the Asian Boxing Council and the WBC:

I want to report some major misconduct by both WBC officials, Abraham Khalil Mitra and Robert Bridges. Both of these individuals have made personal attacks against me using their positions in WBC. Mitra is a scamming cheat and he collaborated with JC Manangquil of Sanman Promotions in the Philippines and stole my boxer Angelito Merin for an unauthorized fight on 9-9-18 to give Mike Plania a win and WBC Asia title. Baham is a major major cheater.

Also, Robert Bridges has been passing around a criminal record of me that was expunged from my record. Both he and Baham have been passing this fake criminal record around telling people that I am some kind of criminal. I have proof of Robert Bridges doing this (phone screenshots) with ex-boxer Jeff Lacy and he contacted my boxer, Dipika Tiwari, on multiple occasions to:

– Ask her to breach her management contract with me

– He offered to give her a new manager

A WBC judge should not be doing this kind of misconduct. I have filed several complaints on Baham Mitra with the Office of the President (Philippines), Sen. Pacquiao’s office, and the Office of the Ombudsman. You can also contact my boxer Dipika Tiwari to verify that I am telling the truth.

I have been attacked by the WBC because both Mitra and Bridges have done defamation of character to me while in the capacity as WBC officials. I demand that punitive and corrective action be taken. Your attention to this matter would be sincerely appreciated.

Thank you for contacting the WBC. The right person within our organization will evaluate your message and we will answer you as soon as possible.

THERE WAS NEVER ANY ANSWER FROM WBC!

On JUL 23, 2020, Juan Luckey sent another email to both the Asian Boxing Council (ABCO) and WBC again:

I would just like to know if you intend to address my complaints against Robert Bridges and Abraham Khalil Mitra? These two dirtbags are both guilty of doing very dirty and illegal things to me while representing WBC. Both Bridges and Mitra are guilty of passing around an expunged criminal record on me to many people and telling them to not trust or do business with Juan Luckey in boxing. This is defamation of character and I demand that the WBC take punitive action against these malicious individuals. I did not do anything to warrant this behavior from Mitra and Bridges. Can you do something about the dirtbags in your organization? Please see attached.

Although the WBC says they do not participate in corruption in boxing and President Suliaman has gone on record recently in regards to the WBC Franchon Crews title belt robbery scam to say that he’s not racist, KO Warrior can tell you that these two individuals who work under him are some evil racist bastards.

The refusal to respond to KO Warrior’s complaints by the WBC also shows that the WBC is also totally responsible for attacking and sabotaging KO Warrior Promotions from 2016- 2021. People think that the WBC is an honorable boxing organization but all the proof is here to show that they are lying, cheating cowards who attacked KO Warrior Promotions from behind the scenes for years just to benefit other corrupt, cheating boxing promoters in the WBC.

The behavior of the WBC leadership to address their corrupt criminal appointees also reflects the behavior of both Baham and Bridges and how they love to tell others that Juan Luckey is crazy and has a big imagination. However, these two cowards both know that they are guilty of extreme criminal wrongdoing and deserve to go to prison for what they did to Juan Luckey and KO Warrior.

The only thing KO Warrior is guilty of is showing how much we love boxing. When will the World Boxing Council stop its insane, unfair, corrupt, criminal attacks on Juan Luckey and KO Warrior Promotions?