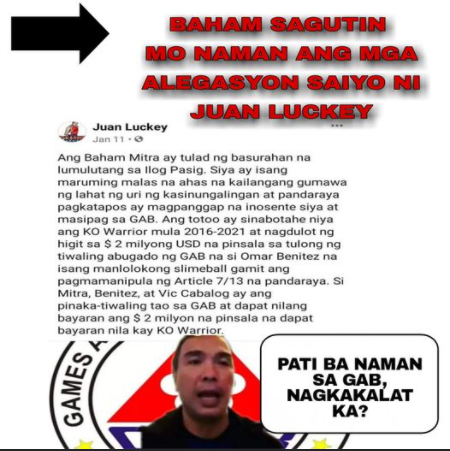 After two years of complaints and criminal charges filed on WBC Vice-President and GAB chairman Abraham Khalil Mitra, aka Baham, aka Bakla Baham, this notorious criminal continues to seek immunity from his crimes from the Duterte Administration.

Evidence Piled Sky High Against Him

If anyone were to consult with the Philippines Ombudsman Office in Quezon City, Philippines, you will find out that Baham Mitra has a large stack of cases filed against him for all types of crimes ranging from graft, corruption, theft, tax evasion, gross misconduct, sex scandals, and more! Baham Mitra gives off the facade of a hardworking politician but the truth is that he is a scandalous, idiot bakla without any morals or conscience for the psychotic decisions he makes to hurt innocent people.

Baham Mitra has to pay for his crimes because he operates without a conscience and this is dangerous to everyone including himself. As many people as Baham Mitra has cheated while serving in public office, it is amazing that this person is able to walk around in public.

Baham Mitra chooses to stay silent about Juan Luckey because he knows he is guilty on all 14 criminal charges filed against him with the Makati Prosecutor’s Office (Luckey vs. Mitra). In this document, it outlines and shows proof and evidence of all of Baham Mitra’s scams, fraud, cheating in boxing, and more! This is why Baham Mitra stays silent because he knows there is more than enough evidence to put him in prison for many years for the scams he orchestrated on Juan Luckey, his wife, and KO Warrior Promotions.