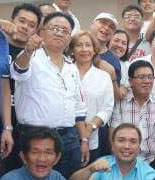 It is no secret that the Vice President of the World Boxing Council (WBC) and Chairman of the Philippines Games and Amusements Board, Abraham Khalil Mitra, is the worst person to ever be put in charge of boxing in the Philippines because he is a thief and super-criminal cheater, liar, and spineless coward.

This corrupt career cheating criminal spent his entire time cheating with the Zamboanga City GAB official Vic Cabalog, to do all types of dirty boxing, cheating, theft, coverup of each other’s crimes, and the typical blanket denials of all allegations against them after they did wrong on multiple occasions and stole money and capital from KO Warrior and other innocent people.

While on the surface, these people in the GAB appear to be hardworking government servants in sports. However, the truth is that several employees of the Philippines Games and Amusements Board are members of an organized crime group led by Baham Mitra.

As explained in our other post about how Baham Mitra cheated the WBC and KO Warrior for Sanman Promotions, Baham Mitra collaborated with J.C. Manangquil of SanMan Promotions specifically to criminally sabotage, rob, steal, do article 7/13 scams, and conduct gross misconduct to include corruption, fraud, robbery, game-fixing, and defamation against Juan Luckey, his wife, and KO Warrior Promotions.

In the photo above, all of the guilty parties of the GAB Organized Crime Group are present. Baham Mitra, aka Bakla Baham, is the mastermind behind his crimes and criminal activities against KO Warrior. Vic Cabalog, the only dude still wearing gold-rimmed sunglasses and butterfly collars, is GAB’s Mindanao scam mastermind who has been robbing Juan Luckey and KO Warrior since 2016.

J.C. Manangquil hangs on the back of Vic Cabalog like the bloodsucking boxing pirate he is since he depended on both Vic Cabalog and Bakla Baham to cheat for Sanman by robbing KO Warrior for money, boxers, doing article 7/13 scams, and other sabotage tactics to KO Warrior.

While denying all of the allegations just like Baham Mitra, A Austria Sazon is a silent sabateur of KO Warrior when he ran a contractual scam on Promoter Juan Luckey with Bernard Yu. On a separate occassion where Baham Mitra successfully nullified Juan Luckey’s status as a promoter while he was promoting a fight in the Philippines, Sazon ran a boxer/manager agreement scam on Juan Luckey with five boxers from Butuan City, Mindanao, Philippines.

Sazon caused serious damage to KO Warrior. Yet, just like Baham Mitra, he chooses to be a spineless coward and deny all the allegations when he knows he is a liar, cheater, and criminal for what he did. KO Warrior never deserved any of this sabotage from employees in the GAB and they are very sick-minded to attack someone in pro boxing in such a criminal and vicious manner.

All of these cheaters continue to stick to their alibi that these boxers are managed by others like important politicians. However, both of these boxers collaborated with Vic Cabalog to scam Juan Luckey and KO Warrior. Of course, Cabalog and the boxers themselves deny all of the allegations. However, if anyone has ever done any boxing business with Vic Cabalog or in Mindanao since 2016, they will know that there is a prevalent scam culture in Mindanao pro boxing and the leader of all of these scams all lead back to Vic Cabalog.

In addition, Juan Luckey has proof and receipts of fights paid for both Kim Actub and Aisah Alico in 2016 for promotion and management fees paid to Vic Cabalog – Philippines Games and Amusement Board in 2016 on multiple occassions. Both Vic Cabalog and Baham Mitra committed illegal forgery and perjury by suppressing this evidence and pretending that Cabalog did not do criminal fraud and theft to Juan Luckey and KO Warrior Promotions.

Nobody Ever Hold GAB Criminals Accountable