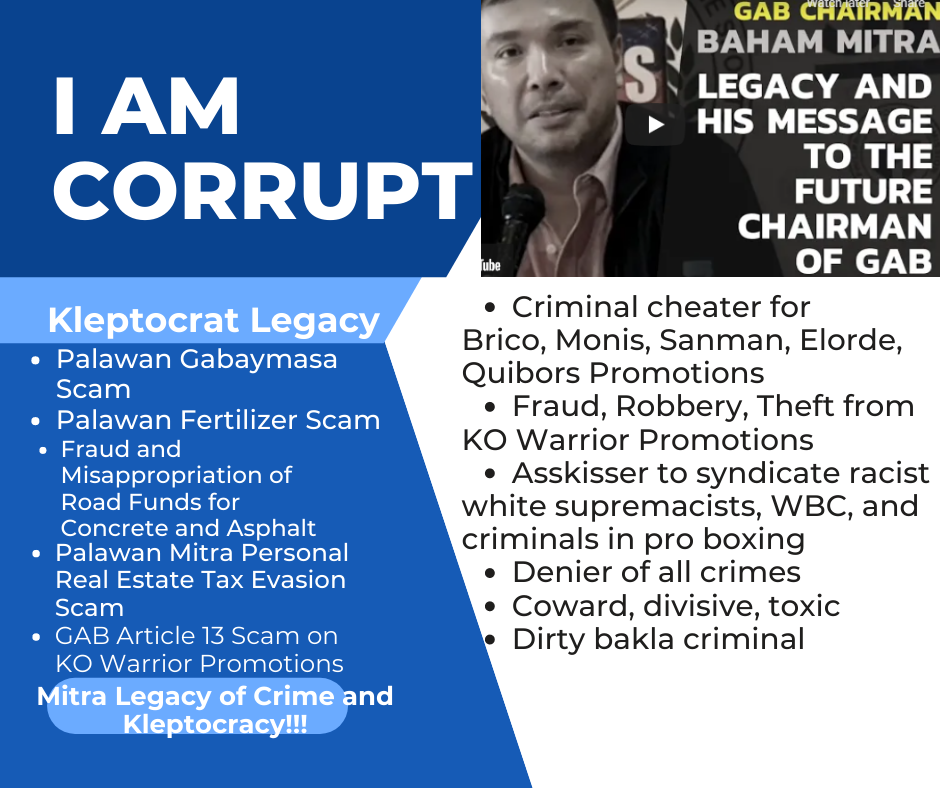 With the newly elected president of the Philippines, Ferdinand Marcos Jr., this time marks the end of Abraham Khalil Mitra, aka Bakla Baham, and his six-year reign of criminality, cronyism, and corruption finally comes to an end. Hopefully, with a new government in office, there will finally be a leader of the Philippines Games and Amusements Board (GAB) who is not interested in kleptocracy, cronism, cheating, dirty boxing, self-aggrandizement, among other toxic activities that ultimately damage the sport of boxing and leave Filipino boxers with losses on their records, being stripped of their titles, and retiring from boxing with no money or benefits. This is the real legacy Baham Mitra leaves behind for countless Filipino boxers whose lives he has either ruined or had their boxing dreams deferred.

The Philippines Games and Amusements board is full of corrupt individuals. In addition, the GAB officials in satellite offices in locations in Mindanao and other remote areas have zero oversight by the main GAB office in Manila. Many times KO Warrior Promotions has witnessed the corrupt activities and crimes committed by dirty GAB officials but they are able to get away with immunity each time because the dirty GAB chairman will protect these individuals. This is what Baham Mitra did for dirty GAB employees like Vic Cabalog, A. Austria Sazon, Rex Flores, Jackie Lou Cacho, the dirty GAB legal division attorney Ermar U. Benitez, as well as many other employees in this corrupted organization.

A Legacy of Being a Dirty Bakla Criminal

Bakla Baham Mitra pretends that he is worthy of being honored for some kind of legacy. The only legacy this toxic person has is a record of dirty deeds and actions followed up by denials and manipulating the Philippines legal system to get charges dropped. Baham Mitra’s true legacy is being a toxic, selfish bakla who thought he could attack innocent people in pro boxing who he deemed as “unwelcomed foreigners” and “illegal aliens” which is a backwards ethnocentric attitude that has no place in the Philippines or anywhere in today’s global economy to include pro boxing.

Baham Mitra spent six years trying to make his own version of pro boxing. The lsat six years have shown that this person actually knows nothing about boxing and uses the sport to aggrandize himself and his friends to include Sean Gibbons and other corrupted partners from the USA. Baham Mitra is a complete idiot and a total menace to boxing. He has been rewarded by the WBC repeatedly because they have made so much money using Mitra to do whatever they want. He is a stupid Filipino coon for white supremacists and anyone who he thinks is wealthy.

Baham Mitra is the dirtiest bakla because he is a coward to attack another innocent man then deny his dirty actions. This is a pure coward and bakla Baham Mitra is one of the biggest pussies ever because any real man would take accountability for his actions. Mitra continues to deny all the dirty things he has done because he is the purest form of a coward and has no place in professional boxing nor any sport for that matter.